We were delighted to hear that Sarah Morel of Reclaimed Woman was going to interview dealer and artist couple Chris Holmes and Chloe Holt, Bath exhibitors who are joining us at Bruton for the first time in 2017 so we wanted to share this with you.  With Venice as a backdrop this was bound to be quite a romantic take on their life! 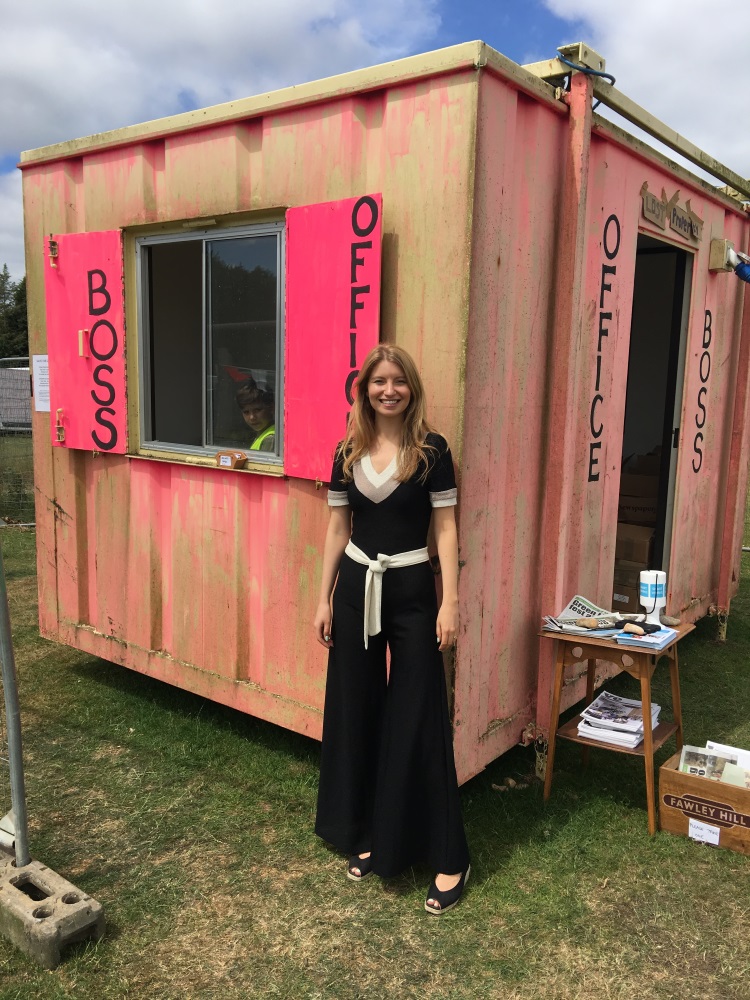 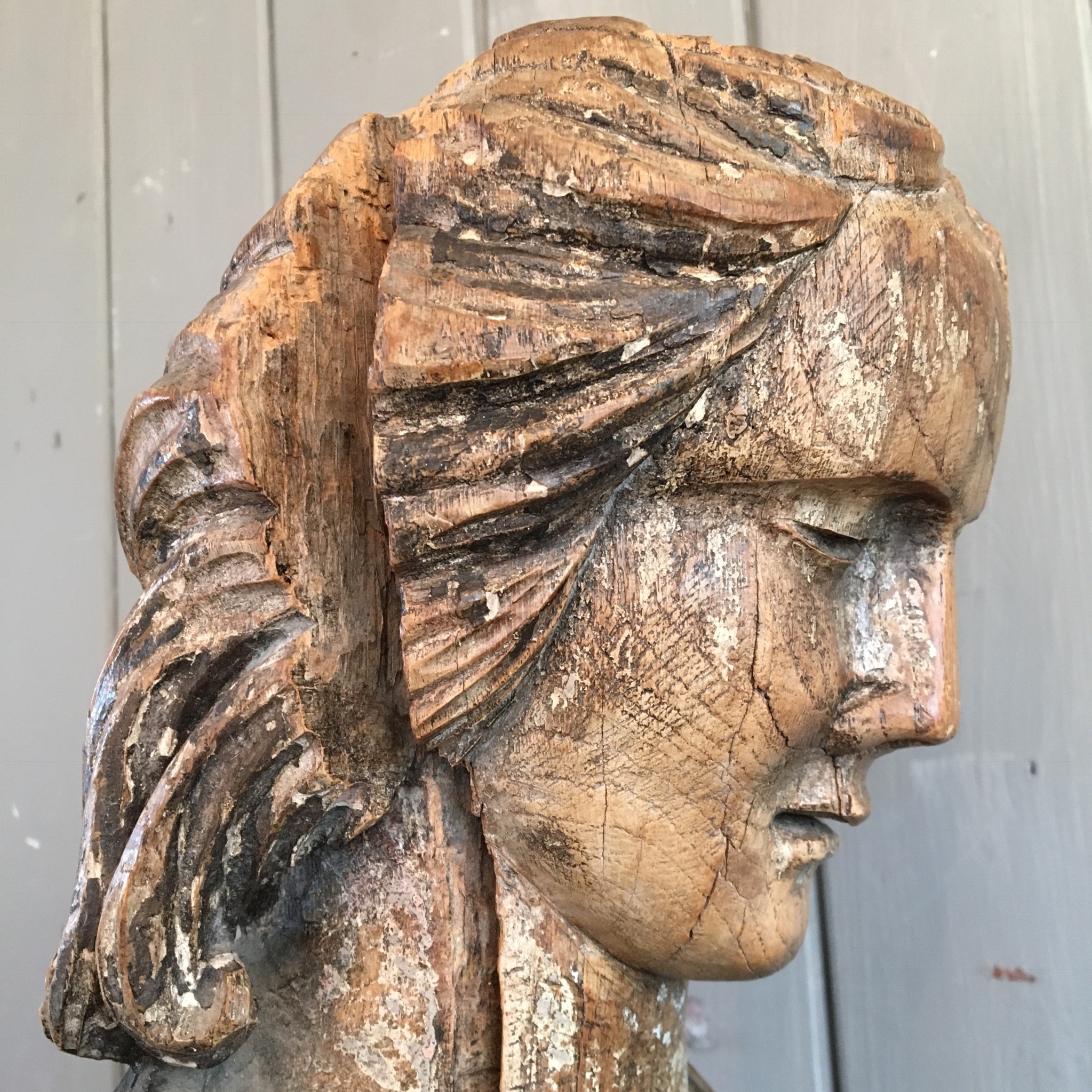 Artist Chloë Holt and dealer in rare antiques, Chris Holmes have cultivated the kind of careers many dream of, doing what they love.  There is an air of anticipation as I interview the two, both buzzing, ready to stand at Bruton Decorative Antiques Fair this October.  It might sound early, but excitement has been building since Bruton launched onto the interior calendar last year at the luxury laden Haynes International Motor Museum. 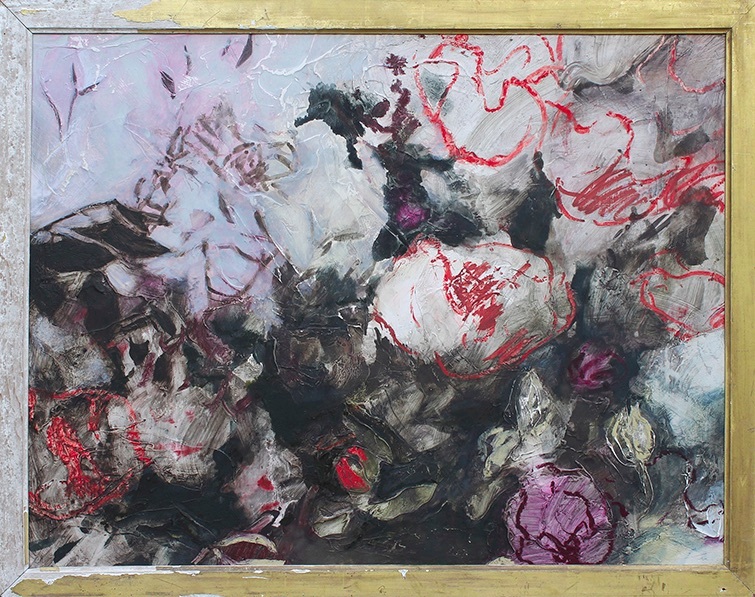 Whether buying or selling, unexpected things can be found at fairs.  Love – Chloë and Chris confide, is one of them.  They met at a fair five years ago.  “I was getting inspiration and Chris was selling the most amazing things,” Chloë recalled, including his grandmother’s Italian mirror, which she persuaded him not to sell.  Most men don’t present a  sixteenth century Italian altarpiece painting depicting deep blue skies that match their “sparkly blue eyes.”  It’s a good thing Chris’ father had the sense to sack him from the family shipping and haulage business, telling him to go and do something he enjoyed with his life instead.

Intuition, an exhibition by antique dealer and interior designer, Axel Vervoordt with Daniela Ferretti inspired their recent trip to Venice, but it turned out Chris had more than the Biennale in mind, and he proposed.  Chloë didn’t say no… 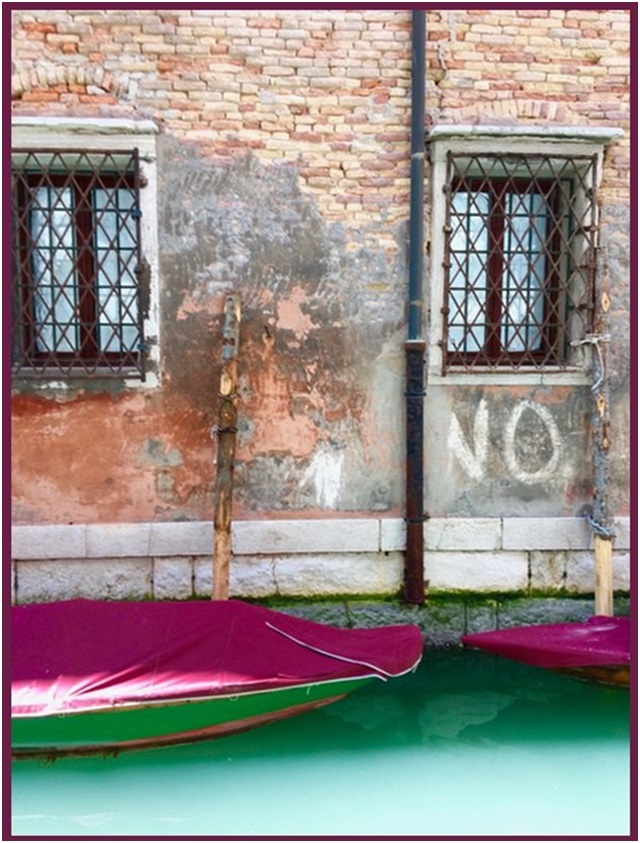 Think but not too much.  There are two ways of understanding intuition – the scientific take says it comes from a subconscious store of knowledge and experience, the kind that underlies a dealer’s seasoned eye for style and authenticity.  The other mystical and fateful face of intuition defies reason and explains the saying when you know, you know.   As Chris and Chloë show us, both senses of the word can come into play at an antiques fair.

“A real time of change and experiment” came for Chloë when she sold her first painting at her degree show.  A first foray into her now signature, textural mixed media work, the painting depicted rusty red brackets in a snowy vision of the Horseshoe Pass in North Wales on New Year’s Day.  That year would later see Chloë win the Royal Society of Arts Student Design Awards and become a Fellow of the RSA. 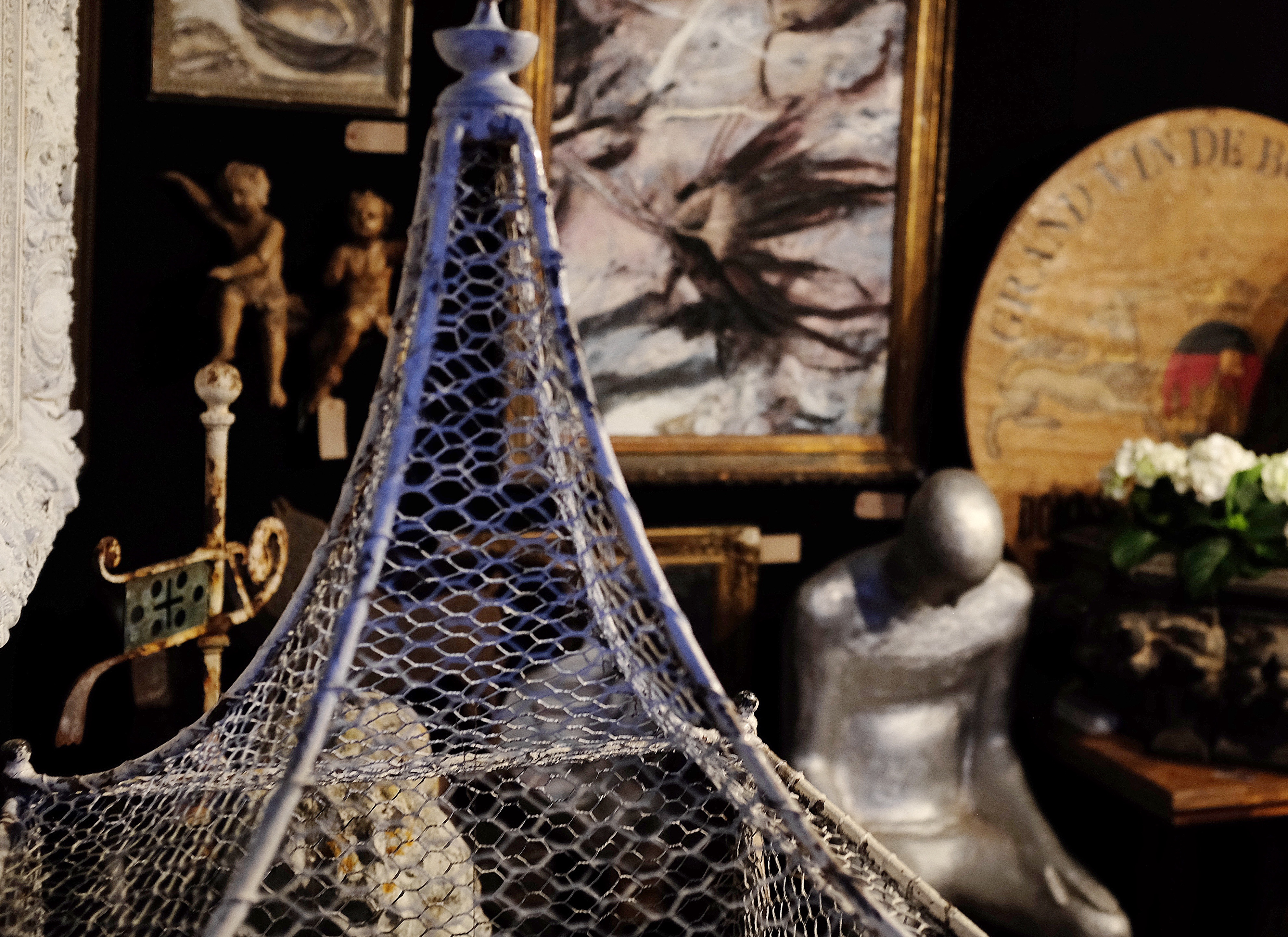 I was introduced to the couple in February at the Bath Decorative Antiques Fair, the longstanding fair by Cooper Events, the same organisers behind Bruton.  Now exhibiting together, they describe their tastes as eclectic, yet identical and only disagree about the amount of stuff they can squeeze into their home.  Forget museum-like living, Chris makes Italian Renaissance pieces, antiquities and early art feel ripe for real living, alongside Chloë’s paintings with their celebration of imperfection that puts one at ease in their presence. 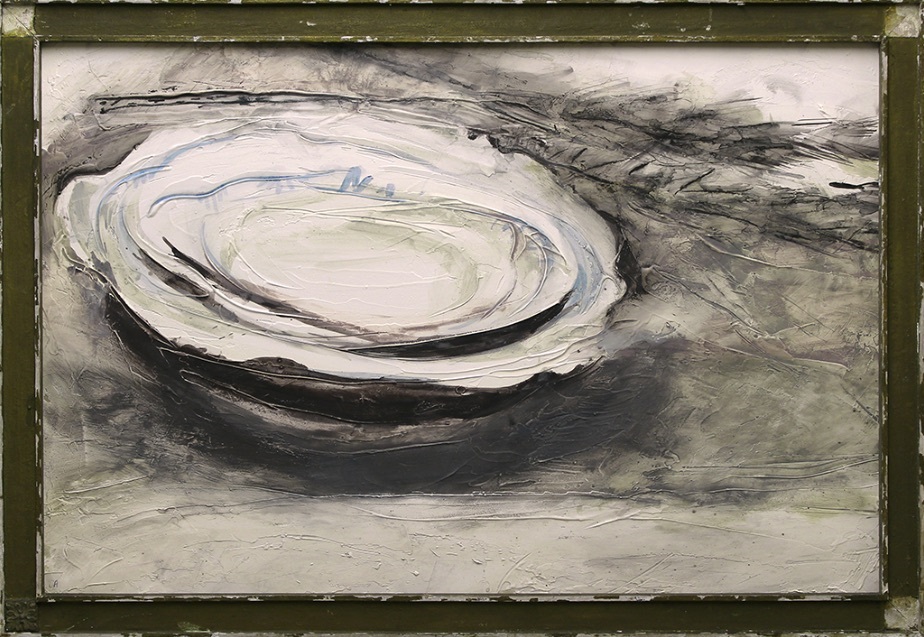 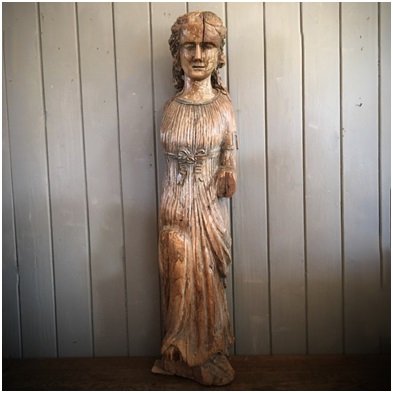 Signs of provenance, past stories and the green-minded make beauty of reused objects.  Chris has “always felt there is no more eco-friendly way of living than valuing an object for not only its beauty and quality, but also for the fact it can and is reused over hundreds of years.”   I bought a French grape pickers’ hod (similar to the below, flagged for Bruton) from Chris this summer at Salvo.  The crest represents the Pope’s vineyard, and almost a hundred years later, the hod is holding my house plant. 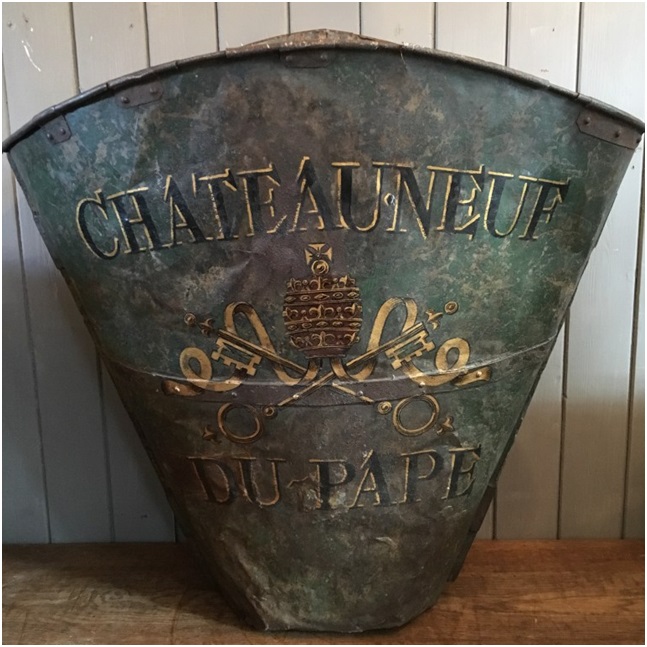 Bruton promises a trove with the best decorative antique dealers from the UK and Europe. “Just make sure you are an early bird and ready to make quick decisions as competition to buy from these dealers’ collections is fierce. Don’t miss out by hesitating – there is nothing worse,” Chris shares from his personal experience!

He strongly believes the best way of learning about antiques is to handle them, see them and experience them and learn from the specialist dealers who are selling at fairs.  Chris never stops learning, “there is always something new and exciting to discover.”

Should you discover a giant clam, a sycamore dairy bowl or an early onion bottle, Chloë could be close, collecting inspirational objects for her studio… 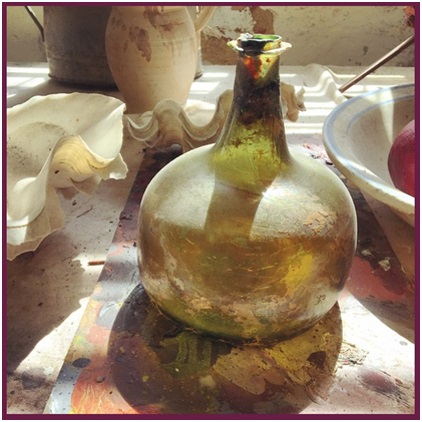 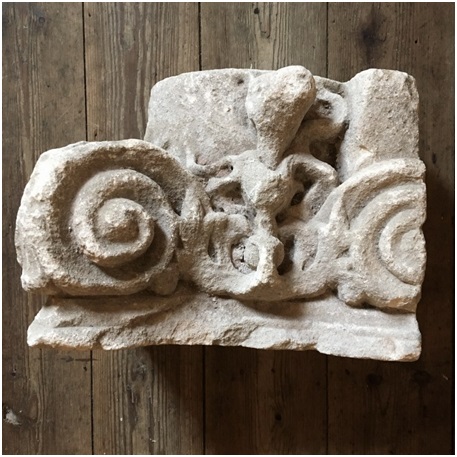 Be sure not to miss the rare early stone Minoan capital with a carved octopus motif and Chloë’s sought after paintings on the Chris Holmes Antiques stand, which promises plenty to excite both the eyes and the mind.

Entry is £5 or get your Free Ticket here